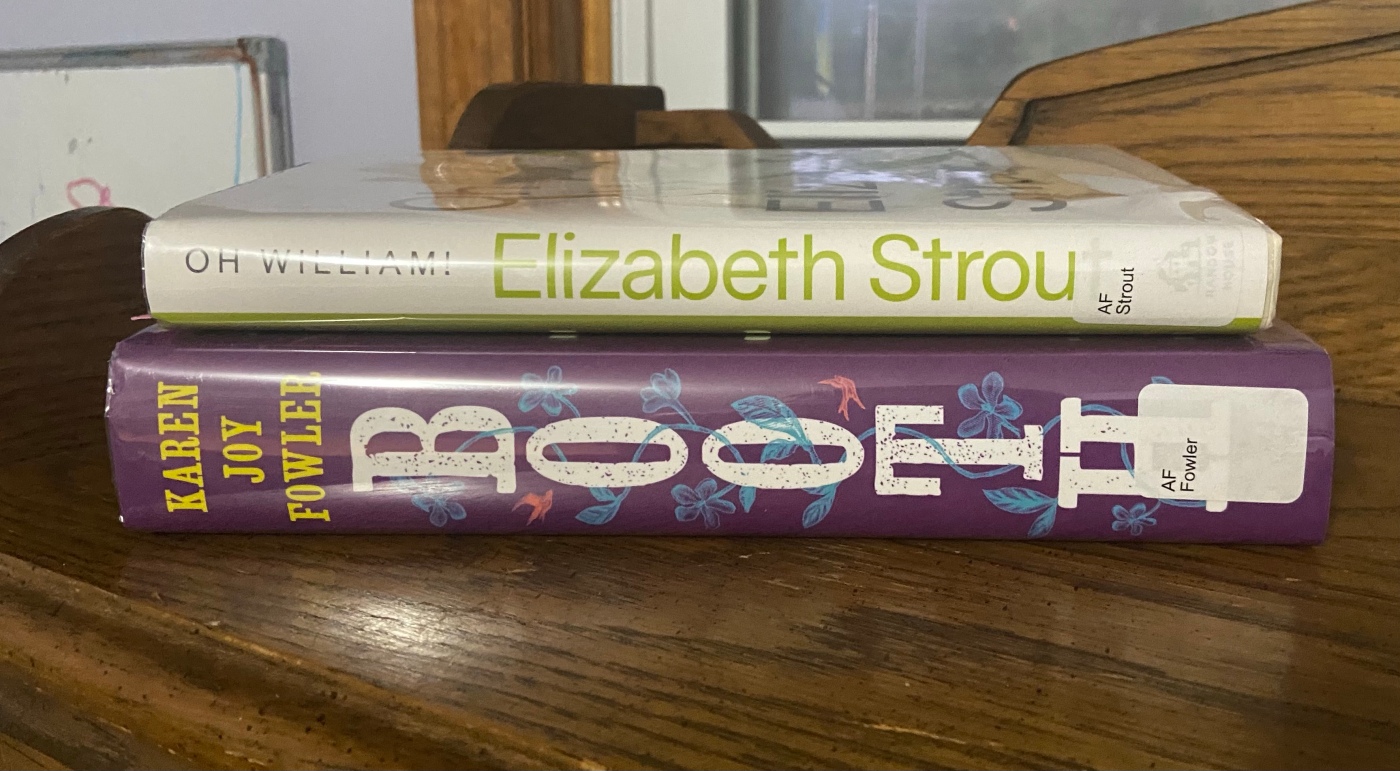 Happy Wednesday! I’m here today so share what I’ve been reading this week. It started out slowly but has ended with a bang because The Booker Longlist was announced yesterday! I hadn’t read any of the thirteen books when the list was announced, but I finished two by the time I FINALLY went to bed last night! It’s called mania, my friends, and I don’t recommend it. But it was fun! And on to this week’s list:

The Locked Room is the newest in the Ruth Galloway mystery series and Elly Griffiths’ pandemic novel. Zoe, a new neighbor, rents the cottage next to Ruth and Kate just before the pandemic hits, which gives them just enough time to get to know each other before lockdown. Their friendship helps keep Ruth sane while working from home while Kate does Zoom school in the next room. And even during the pandemic, Ruth is roped into a ghastly serial killer investigation involving the ghost of The Gray Lady, a woman who died in England of the plague. A huge family secret is revealed that rocks Ruth to her core and Ruth’s relationship with Nelson shifts a bit more. This is my favorite Ruth yet – there were moments of genuine intrigue and heart-stopping fear. I couldn’t stop listening! I’m hoping there will be a new one next year.

An Incomplete Revenge is the fifth Maisie Dobbs mystery and I feel like I might be hitting my stride with this series. I’ve found that the first 3-4 books in cozy mystery series are a bit less compelling (I’m thinking of Ruth Galloway and Armand Gamache), but I am totally hooked by the fifth books. This one was especially intriguing because it involved weaving, dying tapestries, “gypsies,” and fortune telling. We learn that Maisie’s grandmother was a Roma and she forms a particular bond with the traveling caravan that she meets while working on a case. Their lives are fascinating! The small farming village that Maisie is investigating believes that it’s haunted by the ghost of a young boy who died during WWI in France, but there’s more to this story than what meets the eye. I’m on the waitlist for the next audiobook in this series!

Small Things Like These was on the Booker Longlist yesterday and I saw that it was available on Libby. I borrowed it and was delighted to find that it was only 70 pages – and I was even more delighted to find that those 70 pages were totally compelling and I couldn’t put down my Kindle until I finished the whole thing. The author did a lovely job of placing the reader into the setting – the winter of 1985 in Ireland. Bill Furlong is a regular man who delivers coal and logs for a living. He can’t help but think that there might be more to life than running from one thing to the next just to survive. And when he finds the opportunity to do something extraordinary, he makes the brave choice to do the right thing. I found this a fascinating glimpse into some of the dilemmas that religion and poverty can bring and believe I’ll be thinking about this for a long time.

Oh William! was also on the Booker Longlist; I reserved my library’s copy right away and was able to pick it up yesterday afternoon. And yes — I stayed up way past my bedtime to finish it. I hadn’t read any Strout since Olive Kitteridge and began this book by thinking that the narrator, Lucy Barton, was actually Olive… and I was very confused! But once I set myself straight on Goodreads, I was able to settle into the story and the characters. Friends — it was like I was sitting at a coffee table with Lucy and she was confiding in me. The depth of emotions in this book were vast and I was sighing, Oh William! right along with her. And when Lucy said that she often felt invisible, I totally understood her. I walked away from this book feeling as though Lucy Barton was my friend and that I need to return to Strout’s backlist and gobble it all up.

We finished two more read alouds this weeks. Bryce and I have been reading George’s Marvelous Medicine before bed. Roald Dahl was so twisted. George’s grandmother is a mean and nagging woman so George decides to give her a different kind of medicine. He collects all sorts of liquids from the house and the barn and boils it all up. The results are quite disturbing, as you might guess.

Bronwyn and I finished an American Girl book: Josefina Learns a Lesson. Josefina’s family loses their sheep during an awful storm and Tía Dolores has the idea to recoup their losses by weaving their stored wool into blankets to sell. Josefina’s older sisters know how to weave but Josefina must learn. Through this book, the girls all find ways to grieve their mother and to allow more happiness into their lives without her. I am still enjoying this family and we’ve begun the next in the series.

I have to share that we’re having a difficult time with Colton’s sleep schedule the last few weeks… as in: he’s basically falling asleep near midnight and waking around 5 each morning. I’ve been thankful for audiobooks and small knitting projects that can be picked up/put down quickly! But time at my computer has been quite limited – I have time to work a tiny bit on future posts each morning and then I’m off to the races. I’ve been reading your blogs on my phone but logging in to leave comments has been difficult. And responding to your comments has also been hard for me! So I hope you’ll stick with me during this phase – which will pass! They always do! (And I’m ready for shorter days and cooler nights because that will help his sleep schedule more than anything.)

I hope to be back on Friday with another quick update. I hope you take good care over the next couple of days!