We’re only a few weeks into 2018, but I think A Gentleman in Moscow is a contender for my favorite book of the year! In a lot of ways, this felt like an adult version of Eloise and a more approachable War and Peace. I’m not an experienced Russian novel reader, but I would have easily believed that the author was a classic Russian novelists.

Set in Russia in the 1920s, Count Alexander Rostov is punished for penning an anti-Revolution poem. He is sentenced to never leave the Metropol, a grand hotel in the center of Moscow. He’s forced to leave his grand suite and move into a tiny room in the attic where he watches the entire world change around him.

The count has spent his life as an aristocrat and has a taste for the finer things in life: good food, good wine, good literature. He is a student of people and an astute observer who is able to recommend the perfect wine or anecdote for any situation; the very complexity of human nature is his pursuit.

“After all, what can a first impression tell us about someone we’ve just met for a minute in the lobby of a hotel? For that matter, what can a first impression tell us about anyone? Why, no more than a chord can tell us about Beethoven, or a brushstroke about Botticelli. By their very nature, human beings are so capricious, so complex, so delightfully contradictory, that they deserve not only our consideration, but our reconsideration—and our unwavering determination to withhold our opinion until we have engaged with them in every possible setting at every possible hour.”

The people that Alexander meets in the hotel become his lifelong friends. Inexplicably, he becomes a father and raises a daughter here. He witnesses the rise and fall of the Russian revolution from behind the spinning doors of the hotel – street names change, monuments destroyed to make room for new leaders, the rural Russian lands are forced to produce what the country requires, the cities fill with manufacturing plants while its workers continue to starve.

Whoever said that a book should be rated by the number of book darts used is a genius. Maybe no one has said that, but it’s true! I was breathless throughout this story. I was filled with joy, hope, and the belief that, despite the turmoil in the US right now, good people still exist and will never be oppressed. And it was beautiful and thought-provoking. Towles hit the nail on the head in so many passages and has proven himself to be a perceptive and articulate observer of human nature. 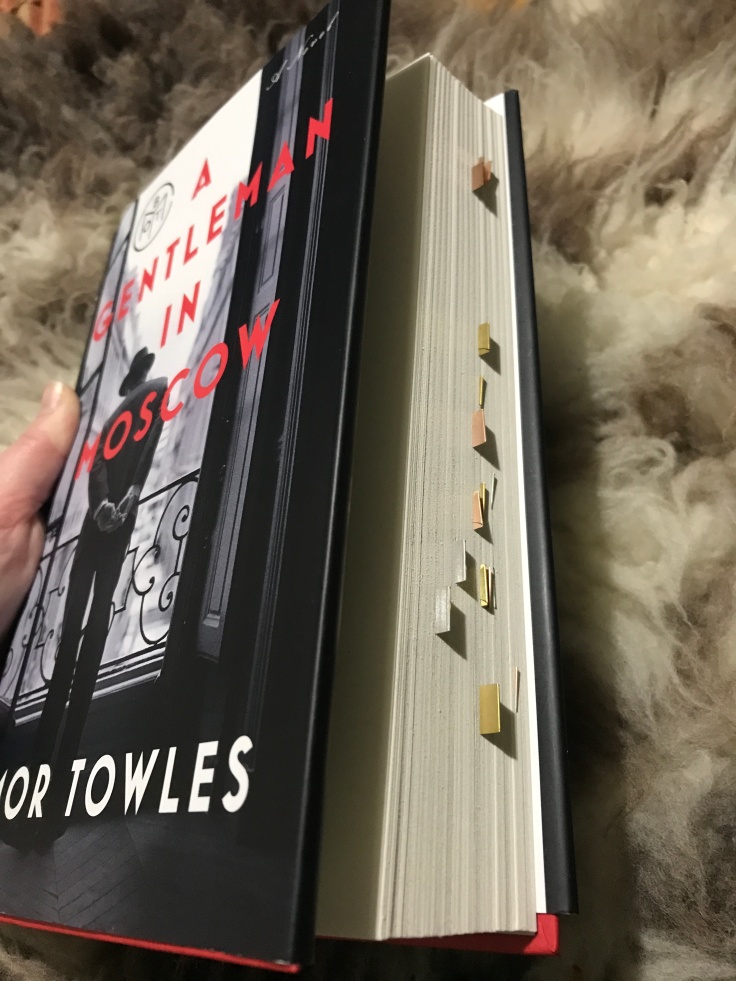 The following is an affiliate link. If you purchase this book after clicking on it, I will get a small reimbursement from Amazon. Thank you in advance for supporting my passions!

2 thoughts on “A Gentleman in Moscow by Amor Towles”