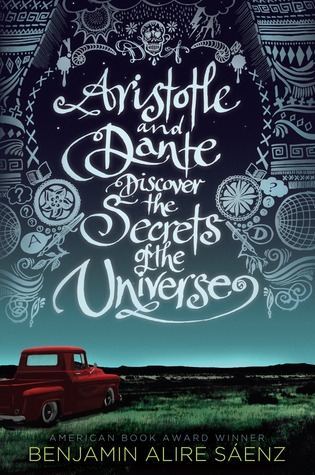 I believe that Aristotle and Dante Discover the Secrets of the Universe is technically Young Adult, but the topics it broaches are painful and relevant to nearly every one. This is a beautiful book – only made better with an audiobook narration by Lin-Manuel Miranda – that stopped me in my tracks and took my breath away so many times.

Ari is a teenage Mexican-American boy growing up in El Paso in the 80s. He’s a little bit angry  – his father is a Vietnam Vet who left the war with hidden scars, his parents are both devastated that Ari’s older brother was sentenced to prison, and Ari feels the invisible distance that those experiences bring. Ari doesn’t have many friends until he meets another boy, Dante, at the community pool. Dante is also a little bit awkward and feels as though he doesn’t quite fit in.

This story follows their friendship over a couple of years. We experience their difficulty fitting in culturally – not quite “Mexican enough” nor are they quite “American enough.” We also experience the discovery of their own selves and ways of loving others, no matter how difficult society makes it.

Ari and Dante both had incredible parents despite their mistakes along the way. But what parent hasn’t made a mistake? Their love for their children was palpable and gave me hope for this world.

Literature and art played prominent roles in this novel, which helped it fit in nicely with the other books that I’ve been reading and loving lately! Dante is an artist and both boys devour poetry and classic literature so impressively.

This is the new American coming of age novel that we’ve been waiting for. It’s LGBTQ friendly, so if you know a teenager who could use some encouragement and hope for love in their lives, this should be put into their hands as soon as possible. I’ve said it once during this post, but I’ll say it again: this was a beautiful book. It was simply written, which seemed to make it all the more powerful. It tackled tough themes head on and showed that we all deserve to love and be loved.