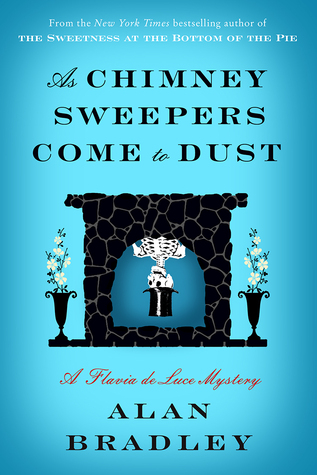 As Chimney Sweepers Come to Dust

is the seventh Flavia de Luce novel and I think this might be my favorite yet! All of these novels build off of each other and it’s difficult to write a review without giving anything away, which is why I’ve chosen to be sparse with

plot descriptions. But it feels as though Flavia is getting closer to understanding her mother’s death and the circumstances surrounding it.

Flavia is now attending Miss Bodycote’s Female Academy in Canada, which is the school her mother attended as a child. Her mother created somewhat of a legacy for Flavia – many of the staff members remember the late Mrs. de Luce and she is a legend among the students.

On Flavia’s first night at the academy, a body wrapped in a Union Jack flag falls out of her chimney, of all places. Flavia quickly befriends the girls at the school and begins to unravel the mystery as only Flavia de Luce can.

The next book in the series has quite a waiting list on Overdrive, so it will be a while until I can continue this series. That’s probably a good thing because I’ve binged on these this month!